Homebuyers pay up to £367,287 more to live in England’s greenest locations

Whether we’re searching for a property with a designated working from home space or paying more attention to the amenities in the local area, lockdown has shifted the priorities of many homebuyers.

Collating data from the Land Registry and Office of National Statistics, we’ve uncovered exactly where nature-loving homebuyers should be property hunting if they want to get the most green space access for their money.

On average, towns and cities in England have access to parks, public gardens and playing fields  totalling 346,330m² - the equivalent of almost 65 football pitches. However, there are actually 82 locations that offer way more public green space than this, making them a great choice for perspective homebuyers who are in search of the great outdoors.

Take a look at our results below to find the cheapest locations for your property hunt, as well as the more expensive places if price isn’t a problem.

Top 10 English Locations with the Most Green Space 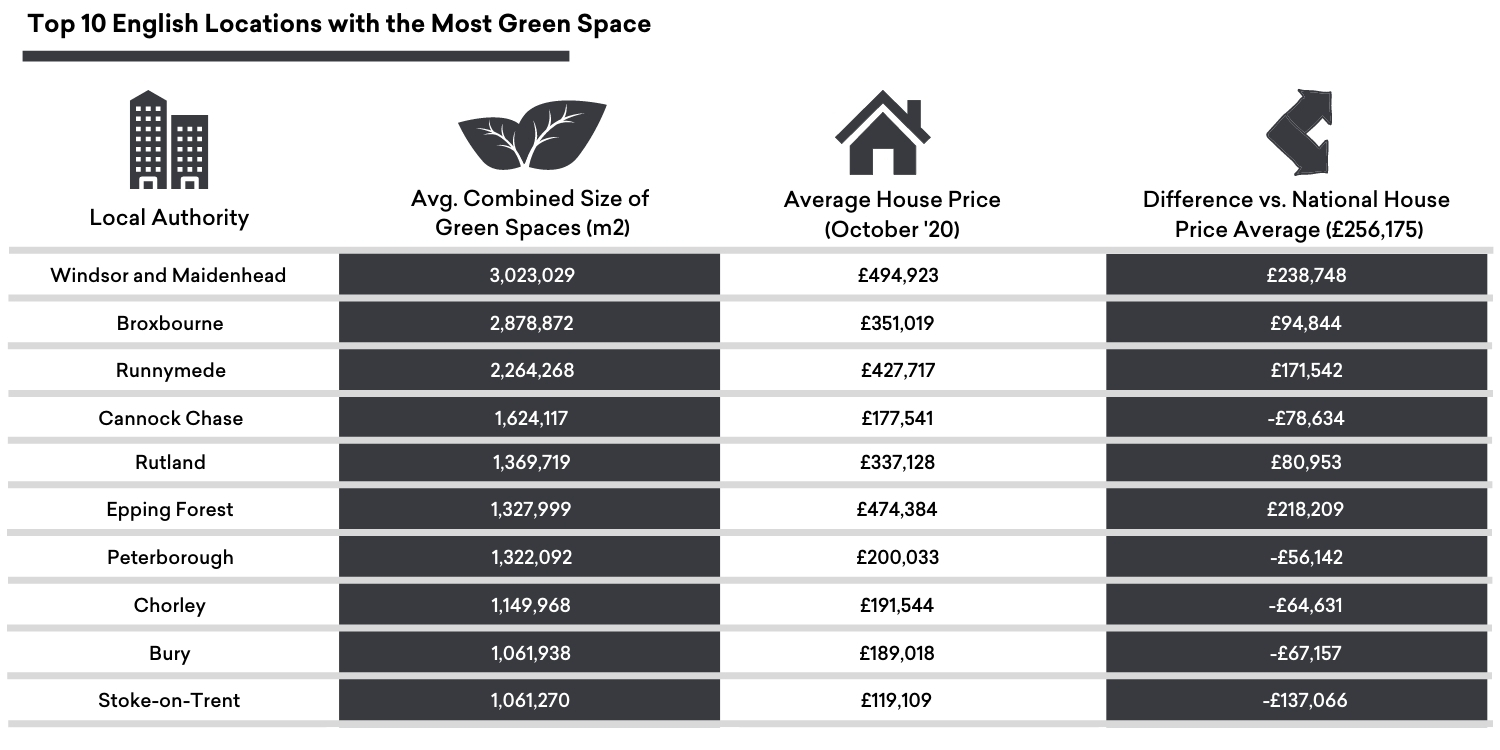 As the ever-mounting lockdowns have encouraged many people to relocate from the city in search of green space access, Windsor and Maidenhead could be an option - although only if you have a large budget to play with.

Windsor and Maidenhead’s public gardens, parks and playing fields total 3,023,029m², the equivalent of 565 football pitches and over eight times larger than England’s average. This space comes at a cost as, house prices average at £494,923, 93% higher than the national average house price, £256,175.

Take your property search to Broxbourne, where you’ll find public green space that is 731% bigger than England’s average at 2,878,872m². 538 football pitches’ worth of green space doesn’t come cheap, as houses in the area typically sell for £351,019, 37% higher than the country's average price.

Channock Chase is a great example of this. Despite offering the fourth largest amount of public green space in the country (1,624,117m²).  houses sell for £177,541 on average, a comfortable £78,634 less than England’s average asking price. Peterborough, Chorley, Bury and Stoke-on-Trent also offer handsome discounts for maximum space.

Homebuyers who are prepared to compromise can make an incredible saving by choosing a location with slightly smaller green spaces. Although these locations may not offer the most public green space in England, the available space all totals more than England’s average (346,330m²), helping you get the very most for your money. 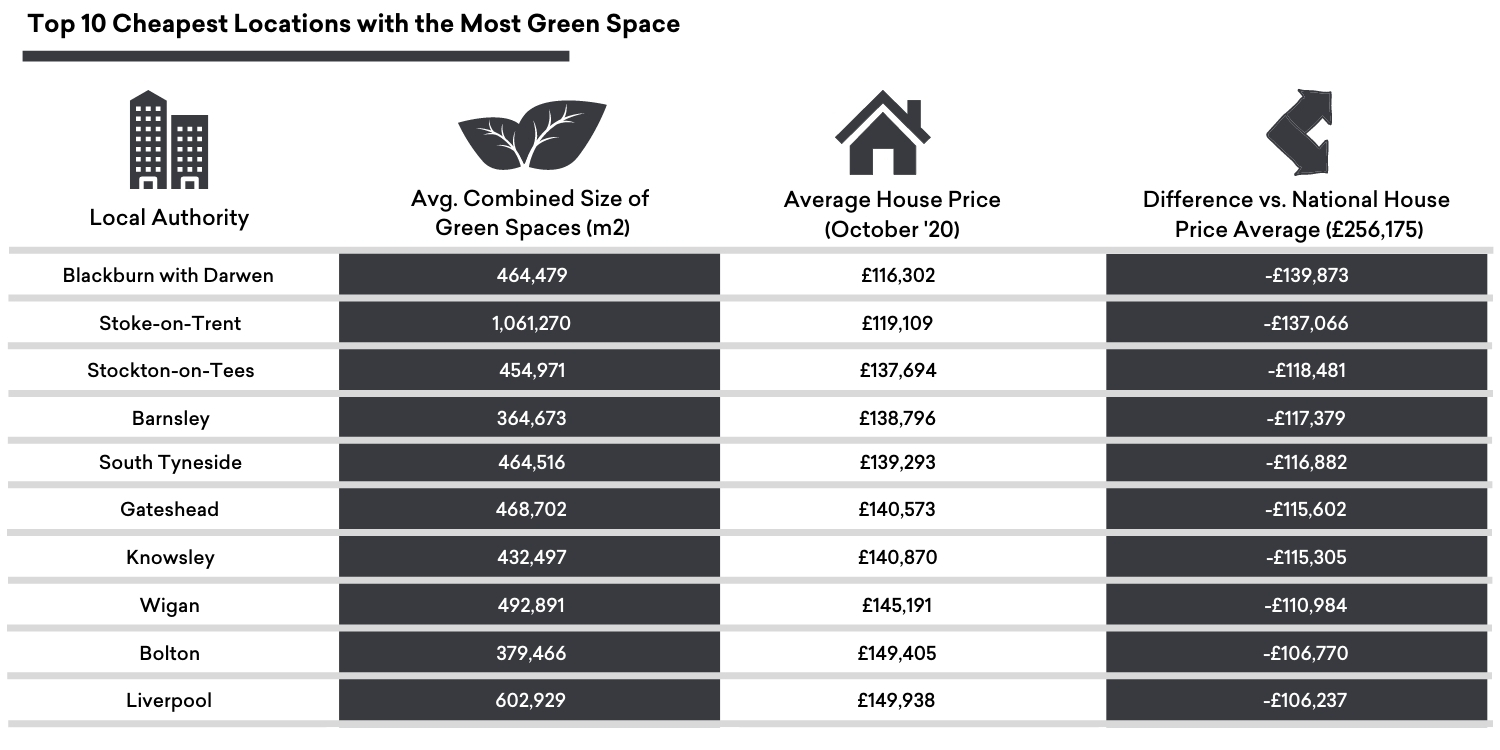 Blackburn with Darwen tops our list as England’s cheapest location for above average green space access. Green spaces measure 464,479m² but even though you’ll have 34% more green space to explore compared to England’s average, house prices are less than half the national average at just £116,302.

Interestingly, the second cheapest location on our list is 10th on our list of our locations that offer the most green space. Houses in Stoke-on-Trent cost £119,109 on average, yet residents will be close to 1,061,270m² of public green space - 206% more than the country’s average!

Unfortunately for homebuyers, prices are less affordable in England’s capital. Homes in the City of London cost £721,490 on average despite offering green spaces totalling 52,308m² - just over a sixth of England’s average.

To view our findings in full, take a look at the size and house price data for all 82 locations in the table below:

Ranked: The 82 Locations in England That Offer The Largest Public Green Spaces & Their House Prices

As people spend more time in their homes, getting the most of your space indoors is just as important as access to green space outdoors. Our sliding wardrobe doors ensure you’re making the most out of the bedrooms in your home.

Please enter your details below along with when you would like to come in a visit us and we will be in touch as soon as we can.