Half of brits hold onto clutter for sentimental reasons

British people are too nostalgic to fully embrace the decluttering movement, a survey of 2,000 UK people by Spaceslide has revealed. 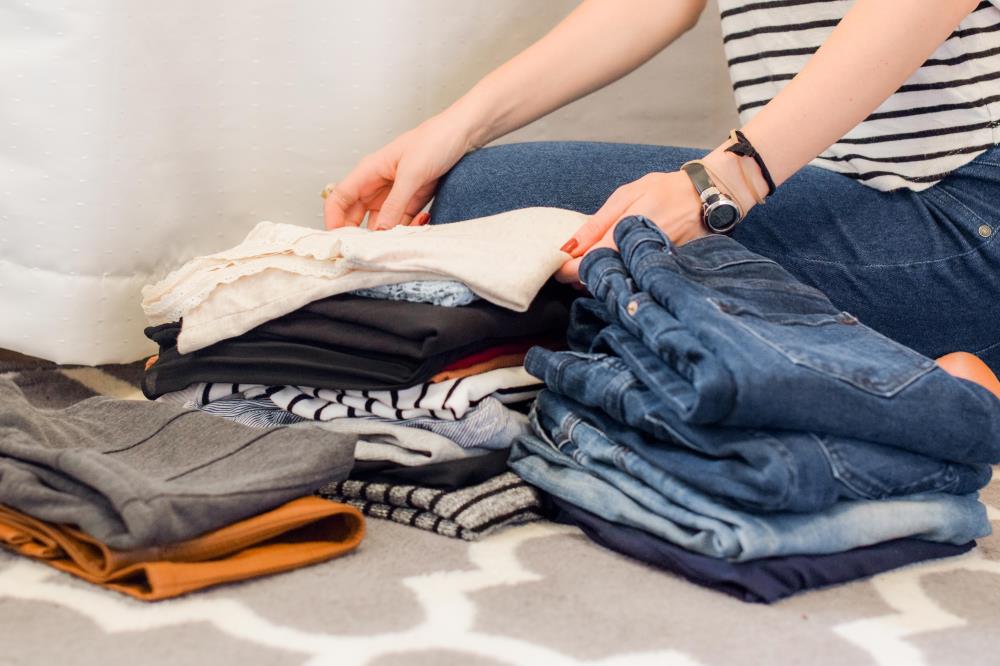 Brits were quizzed on their attitudes to decluttering, which revealed that 50% of Brits struggled with organising their wardrobes due to their sentimental attachment to items.

‘Decluttering’ is defined as “removing unnecessary items from an untidy or overcrowded space”. For many Brits, this includes unworn clothing and accessories, books, electronics, old paperwork, toys and unused furniture or gifts.

Survey participants were also asked about their main reasons for decluttering, as well as how long they had kept the oldest clothing item in their wardrobes. A third said they owned a garment that was between 10-20 years old or older.

REASONS FOR HOLDING ON TO UNWANTED ITEMS BY REGION 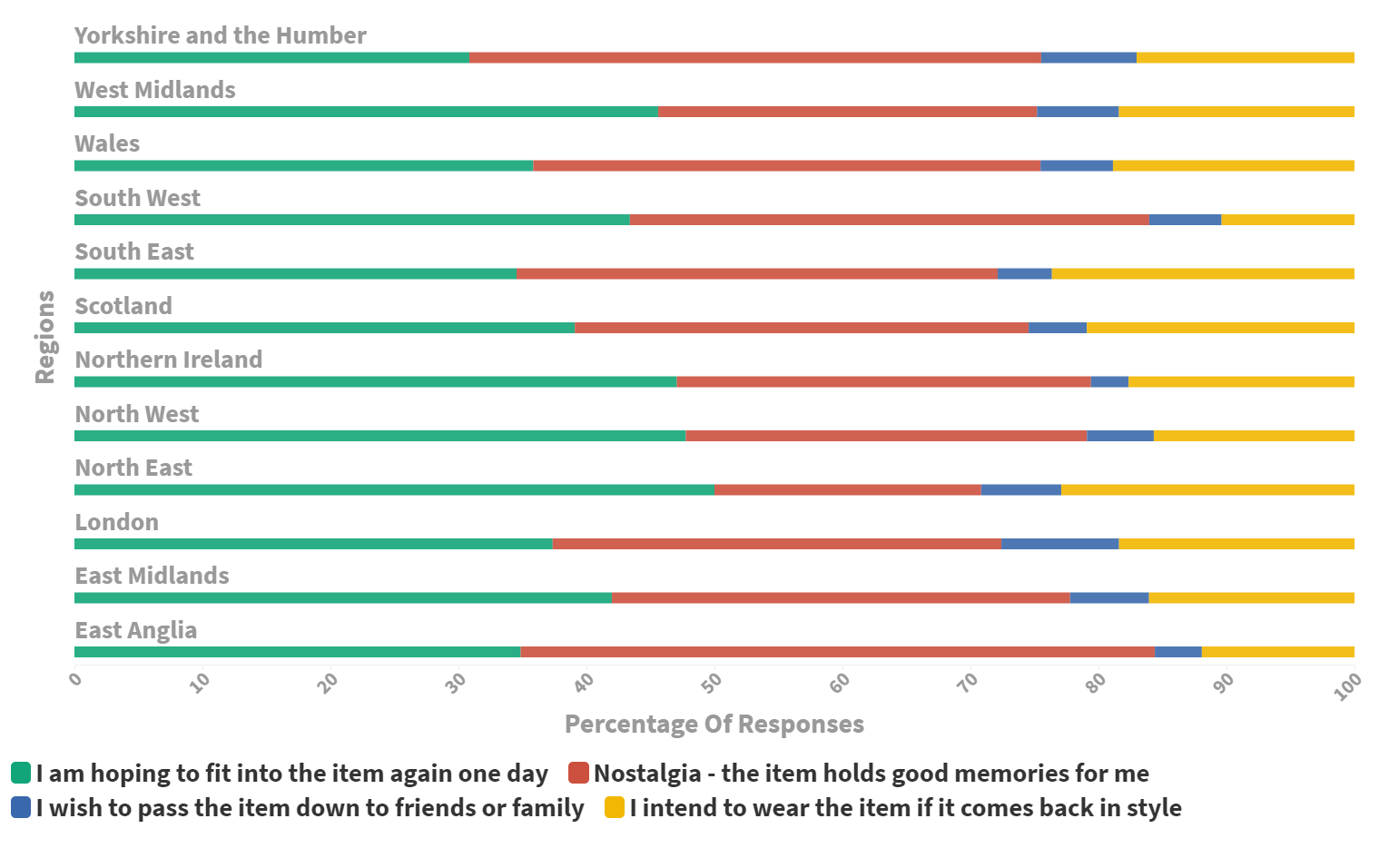 Despite Millennials often being labelled as  the ‘most nostalgic generation’, results revealed that men aged between 35-44 were most nostalgic, while women aged 18-24 felt a lot less influenced by days gone by. Nationally, East Anglia was found to be the region most likely to hold on to their items for sentimental reasons (30%), while the North East (13%) was the least likely to do so.

It should come as no surprise that we are a nostalgia-obsessed nation. From #ThrowbackThursday hashtags, to constant cover versions and movie reboots, it’s clear that we are sentimental about the past.

“Nostalgia is a powerful thing,” said Will Gough, Commercial Manager at Spaceslide, who has noted a growing trend in brands using nostalgia to sell their products.

“Studies have shown that it can influence people to purchase because they think it guarantees them something immediately once they’ve bought it i.e. a happy memory.”

Understandably, this association can also make it equally hard for people to ‘let go’ of objects and clothing they have purchased or been gifted.

Marcella Caricasole of Think Tidy from the Association of Professional Declutterers and Organisers (ABDO) says that emotional attachment is one of the biggest challenges in helping clients reorganise their homes.

ABDO members are trained and certified in decluttering expert Marie Kondo’s methods which include thinking about whether an item still ‘sparks joy’ before making a decision to throw it away.

“We try to get people to ask the right questions; do I need it? Can I use it again? I always suggest to my clients to start the decluttering process where there is less emotional attachment. In this way, the whole process becomes an easier task.”

“One client would not part with a collection of T-shirts from University. We got her to talk about what they meant to her. We ended up cutting a corner of each T-shirt so she had a physical item to keep for the memories, but not the pile of T-shirts that would occupy space.”

Marie Kondo was one of the most searched for celebrities in 2019. Searches for ‘decluttering’ also peaked in 2019, suggesting that more and more Brits were turning to her methods to tidy up their wardrobes. The peak period for Brits spring cleaning their homes also appears to fall between the 9th and 20th of March each year.


‘Decluttering’ - UK Searches from 2004 until Present

Peaks in ‘Spring cleaning’ searches over the last 5 years

The good news is that the UK does seem to be achieving more balance when it comes to tidying up. 46% of Brits said creating space was the top reason they wanted to tackle their clutter. Research by LABC revealed that the average new-build home has shrunk by 4m2 compared to homes built in the previous eight decades, so it’s unsurprising to see this reason topping the list.

“Some reasons for holding onto items are financial, especially for high end items which are expensive,” said Marcella.

“Concern for the environment has also become more prevalent and people are realising they don’t need this stuff and are buying more than they need.”

The key to decluttering is not getting rid of everything you own, but making decisions about what you need - and finding a way to hold on to your memories that doesn’t compromise on space.

For the perfect storage solutions to tidy up your home, take a look at our selection of sliding wardrobes with the option for made-to-measure custom styles.

With our latest articles from the Spaceslide blog uncovering the latest sliding wardrobe design trends and more.

Whether you're putting your home on the market or simply looking for an interior refresh, deciding w...

At Spaceslide, our expert installation team are here to help install your chosen wardrobes. However,...

How and where to buy wardrobes from Spaceslide, from our showrooms to online

Where to buy wardrobes

As Brits self-isolate and practice social distancing in the wake of the COVID-19 outbreak, we’re mor...

Each month our team of furniture and interior designers put together a collection of offers that are inline with the latest trends and interior styles.

If you have any questions about our products or services we’ll be happy to answer them!

Please enter your details below along with when you would like to come in a visit us and we will be in touch as soon as we can.